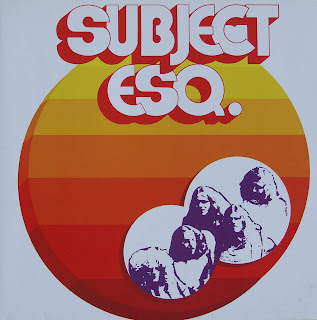 So here is the plan; I am going to put up music for you to listen to and shit, because I am at college and I am bored. Maybe I'll put up funny pictures if I find any.

So the first bad boy is a little gem of early 70's German prog coming in the form of Subject Esq. The band released just one (eponymous) album under this name and would later release a couple more albums under the moniker of Sahara. If you're asking me, this first album was also their best. Sounding much more bluesy/jazzy/almost jam-bandish than many of their contemporaries in Germany at this time, Subject Esq. seems to be channeling bands like Jethro Tull and early Yes much more directly than Kraftwerk or Tangerine Dream. Most of the tracks on this album are nice, meaty, complex pieces that usually incorporate (as one might expect) some passages of direct improvisation. The first two tracks ("Alone" and "Giantania") are titled a bit more towards the pure rock end of the spectrum, with "What Is Love" following up with a much jazzier feel to it. "513" is a nice little piece featuring predominantly the flute and keyboard (handled with great aptitude here by Michael Hofmann and Peter Stadler respectively). "Mammon" is the bear of this album, clocking in at a somewhat modest (at least in the world of prog) 12:40. It has a great great jazz jam line that fades in and out, bouncing on whimsical keyboard work and cushy guitar and flute improv lines. "Durance Is Waiting" is a fine way to close out, with a nice relaxed cruise through the final minutes, letting the guitars out of their cages a little less than halfway through and laying some serious melt on your face.

Some people are going to tell you that Sahara's other two albums are more "mature" or "developed" than this one, and that may be true, but I've always have had the most fun with this. Enjoy.